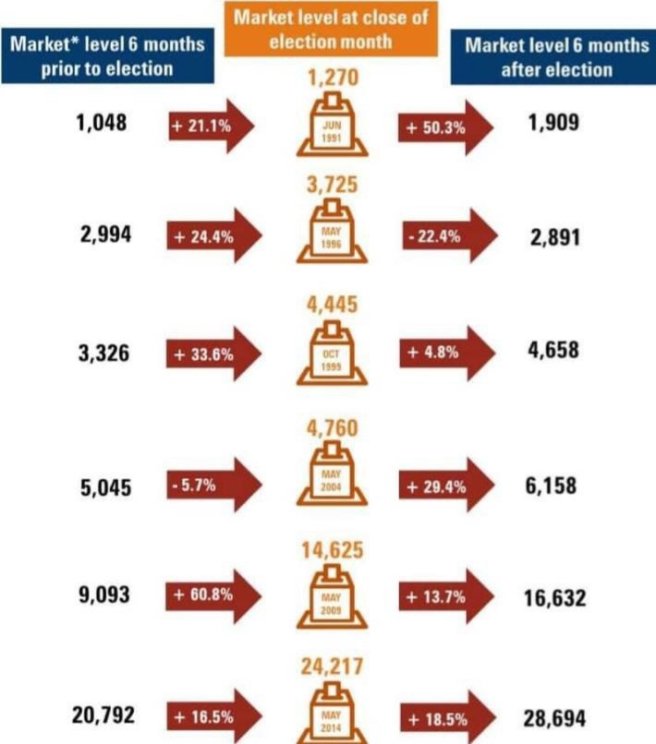 🔷️2019 would be year of huge volatility as Its Election year.Till Election results would be out overhang would remain on markets. Historically also election years have always been volatile times for Indian equity markets.

🔷️One of the key observations over the last three election years – 2004, 2009 & 2014 – has been that the best investment strategy for an investor during such times is the Systematic Investment Plan (SIP) and systematic withdrawal plan (STP) approach.

🔷️As a result, we see 2019 as a year of accumulation. During such a phase, the near term returns may not be high, but investors who invest through the accumulation phase tend to make huge gains in the subsequent Bull market which can be Expected anywhere from 2019 to 2023.

🔷️The last time the market witnessed such a phase was during 2010 to 2013, a time when the market can at best be described flat. However, the returns came during 2014-2017

🔷️Macro wise, India is in a better spot given that crude oil prices have corrected, thereby relieving stress on current account deficit. Also, the pressure on currency too has come off leading to overall financial stability. All these factors augur well for fixed income market as well.

🔷️Keeping aside the political uncertainty, markets have already corrected significantly And MAXIMUM damage has done in midcap & smallcap space.Only strong recovery in corporate earnings and strong macro-economic factors will push the index slowly after Election Results.

🔷️The Data from 2004 to 2014 shows those who have invested prior to ELECTION and stays invested even after ELECTION for next 6mth to 24 months have gained good returns.

🔷️MANY INDIVIDUAL STOCKS WHICH CAN BE MULTIBAGGER OVER A PERIOD OF TIME ARE AVAILABLE AT VERY REASONABLE VALUATION BUT ONE SHOULD HAVE CONVICTION TO HOLD INDIVIDUAL STOCKS AS MARKETS WOULD BE VERY VOLATILE IN SHORT TO MEDIUM TERM.

Disc– All views expressed are personal and Only For Study & Educational purpose only. consult your financial advisor before taking any position or decision based on above article.

Build Wealth through Investment in medium to Long Term. View all posts by wealthcreatures